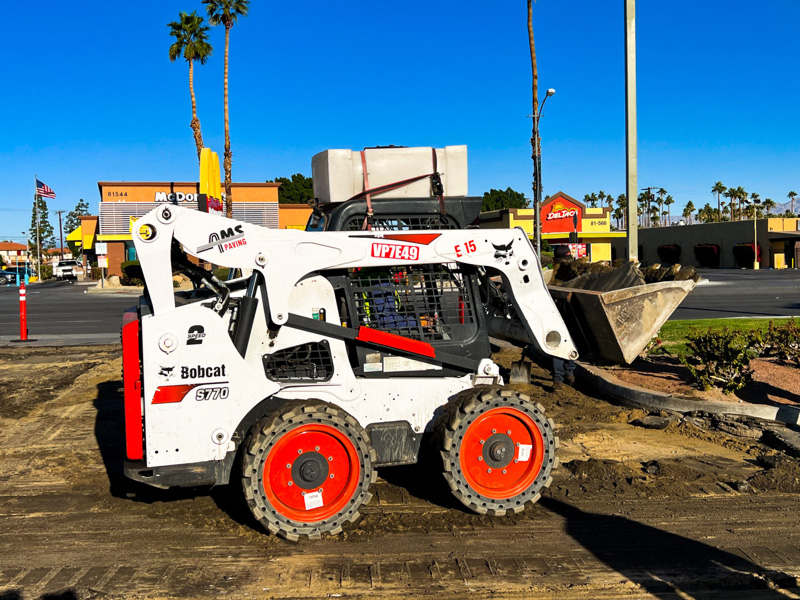 Skid steers (also known as skid steer loaders) are compact and versatile pieces of machinery. They can perform a multitude of tasks across a wide range of industries, from construction to landscaping to agriculture and forestry. They are generally defined by their small size, narrow turning radius, and workhorse potential, making them ideal for tighter environments, like a residential street or narrow construction site.

They are usually found with a bucket on the front but have many attachments that can also be used, including augers, breakers, brooms, snow blowers, and even a wood chipper. We primarily use the bucket attachment to move dirt and soil out of the way to create a smooth grade to apply a new asphalt surface. We also use it in the asphalt removal process to move large chunks of old asphalt off the area to be re-paved.

How does it work?

The skid steer gets its name from the way it is steered. These four-wheeled vehicles have front and back wheels on each side that are mechanically linked together to turn at the same speed, independent of the wheels on the opposite side, with two separate and independent transmissions. There is not a steering wheel but a pair of joysticks, one on the operator’s right and one on their left side and each control their respective wheels in forward and reverse.

Turning the machine is accomplished by differential steering, in which the left and right wheel pairs are operated at different speeds, and the machine turns by “skidding” or dragging its fixed-axle wheels across the ground. With this control arrangement, the operator pushes both joysticks forward to rotate both the left- and right-side tires forward, and moves the joysticks backward to reverse all the wheels. Turning left requires the operator to pull back on the left joystick while pushing forward on the right stick.

Fun Fact: Skid steers are capable of zero-radius turning. By driving one set of wheels forward while simultaneously driving the opposite set of wheels in reverse at the same rate, the machine can essentially spin in circles without moving forward or backward. This ability makes them extremely maneuverable and valuable for applications that require a compact, powerful, and agile loader or tool carrier in confined-space work areas.

Want to learn more about this topic and paving in general? AMS Paving is proud to offer educational opportunities for you and your team. Our course Asphalt Maintenance, Realistic Expectations is approved by Community Association Managers International Certification Board (CAMICB) to fulfill continuing education requirements for the CMCA® certification.

Contact Bevan Worsham at bevan@amspaving.com today to schedule a lunch-and-learn for your office.